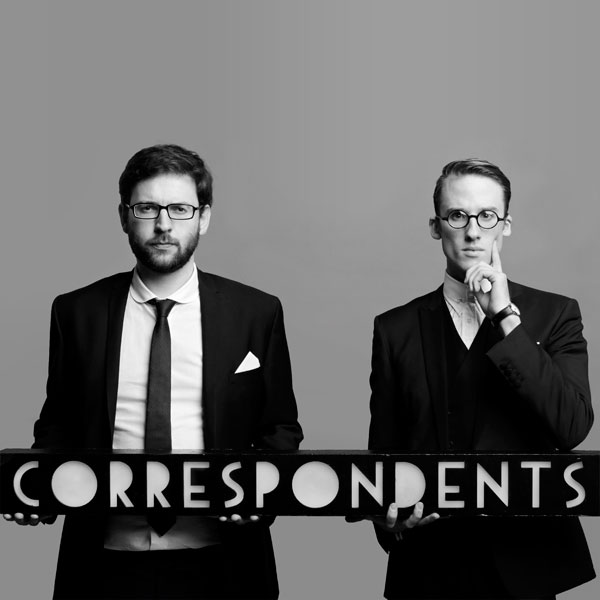 The Correspondents consist of a singer Mr Bruce and a producer Chucks. Both growing up in South London, they formed in 2007 and within two years had taken their hi-octane genre-blending dance music from house parties to festival main stages.

The show that quickly established the duo as one of the best live acts in the UK has Mr Bruce assuming the look of a monochrome matador, singing with force, scatting at speed and dancing like his life depends on it while Chucks takes the audience on a journey through a multitude of genres from jazz and blues to the nether regions of electro and drumʼnʼbass.

Since their inception they have toured far, wide and relentlessly bringing their unique live show to huge crowds (regularly playing to over 10,000 revelers) earning themselves Telegraphʼs ʻTop Ten Glastonbury Highlightsʼ two years in a row. Any time off the road is spent in the studio making music. Their live sets are constantly evolving with regular insertions of new tracks. However it wasnʼt until March 2014 that they pulled together a body of material that they were happy to release as an album. Self produced, recorded and released, ʻPuppet Loosely Strungʼ features tracks that are synonymous with their trademark sound of unique, genre-mashing alternative pop proclaiming the highs and lows of love and lust. This release also reveals a more introspective side of the pair with delicately produced songs that investigate personal loss.

Aside from the music itself The Correspondents have become renowned for their videos that are consistently unique in style and pioneering in technique. ʻWell Measured Viceʼ and ʻGive You Betterʼ were brought to life by Mr Bruceʼs own hand-drawn animation. ʻAlarm Callʼ was also produced by the singer, he creates time lapse/stop motion painted portraits to chart the lives of two characters over 21 years. And the award winning ‘Fear and Delight’, by visionary film-maker Naren Wilks, was made using a ‘composite camera’ technique allowing numerous versions of Mr Bruce to dance kaleidoscopically in the same space.

The Correspondents are at an exciting point in their career where years worth of worldwide touring, musical experimentation and video production has come together with the release of their debut album and laying the seeds for the next.