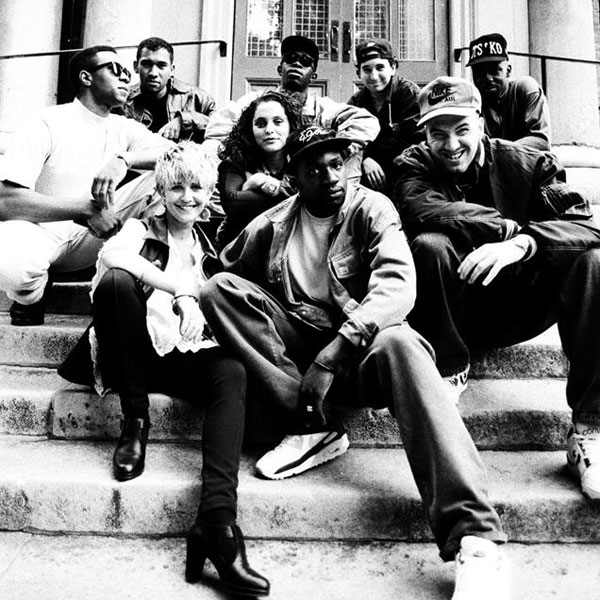 The idea of Blapps Posse was to build a collective of musicians, singers and rappers influenced by the same kind of diverse backgrounds.
Founding members Jazzy Jay and Dazzle D made their first release ‘Rock The Discotheques’ under the guise Dynamic Guv’nors in 1988 and was released on their own label Blapps.

Aston Harvey of The Freestylers started working at Noisegate Sudios (owned by
Double Trouble) in 1989, where he met Jay & Dazzle D. After talking about making tunes; they found they had a similar taste in music so Jay and Aston collaborated to make “Just A Break Freak”.

They then went on to make the seminal tunes ‘Don’t Hold Back’ and ‘Bus’ It’ which DJ Mag coined as “a riotous, sampladelic mish-mash of hip-house and rave” a big influence in 1989/1990. Closer to hip-hop in spirit — with its scratching, mid-tempo beats and cut ‘n’ paste feel — but possessed of those classic rave signifiers, it sums up the time it was made.

Rather than being a street “crew”, they were more of a collective, featuring other artists. One of the Blapps classics “Do What You Want To” which was the first tune as a full group and featured the likes of Dazzle D, S T, Jazzy Jason and MC Untouchable.

As a birthday present in 1991 Jay’s girlfriend paid for some studio time and he came up with the track “Ladies With An Attitude” sampling ‘Madonna – Vogue’ that was signed to Big Life, home to The Orb, Yazz, Gat Décor, Coldcut and De La Soul.

The Blapps Posse back catalogue has been recently re-mastered and available digitally for the first time. To celebrate this occasion they have decided to get back in the studio after all these years and create a brand spankin’ new 3 track EP, that will have all the recognisable Blapps trademarks and elements of yester year that they have created by recovering some old tapes from their studio that had unfortunately flooded.