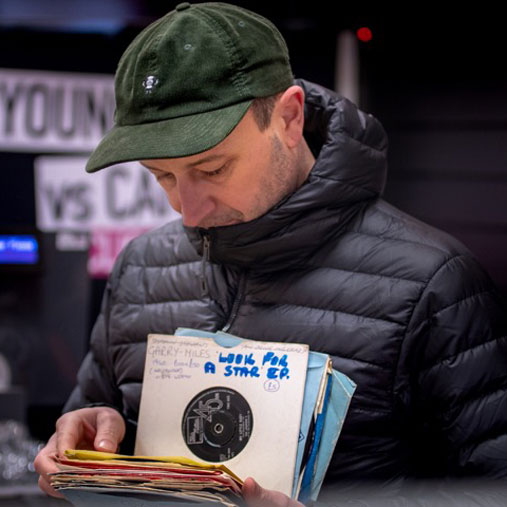 Scott Hendy aka Boca 45 is known as somewhat of a Bristol (UK) institution from his early days in the mid 90s selling Golden Era Hip Hop from behind the counter of the seminal Purple Penguin record shop rapidly becoming one of Bristol’s most in demand DJs for a quick fire mix of bone-cracking breaks, hip hop, coruscating funk, rock and heavy soul these are all of the musical ingredients which make up Forty Five.

Once Scott Boca got to grips with the studio from the early 00’s he’s had continuous releases, remixes, DJ mixes on labels such as Island/Universal, Domino Recordings, Ninja Tunes, Grand Central, Illicit, Jalapeno, Unique & more under a slew of aliases.

At the advent of Scott Boca’s 45th year on planet Earth he decided to hone everything he’s learnt and loved into one killer solo record.

Forty Five is Scott Bocas life story in twelve cuts; the soundtrack to an immersion in sound, it’s an honest personal statement. His Twin teenage Sons designed the Forty Five Logo, Boca wrote the comprehensive sleeve notes personally breaking down the back ground of each track as well as making the inner collage using images from all of the collaborators on the LP.

The first people to hear the record outside of a close circle of friends was titanic U.S. record label Mass Appeal (home to DJ Shadow, Nas, Run the Jewels and the J Dilla catalogue).
They immediately offered and signed the record in a worldwide deal.

Previously Scott Boca provided a track for the Banksy Movie “Exit Through The Gift Shop” & in 2015 the elusive artist personally requested Boca to DJ with his 45s at the opening night at his Dismal Land Show.

2018 saw Boca release Bocas Club Donuts – a series of five highly covetable, DJ Friendly iron banger 7’’ singles which each sold out within a matter of hours to a rabid set of collectors via only announcements via his own social media channels.

Now on to 2019 Boca is ready to hit the clubs and world wide festivals armed with a heaving box of Vinyl Wax to spread the good word of Forty Five to whip crowds into a frenzy with his crazy collection of hot 7” donut Forty Fives.